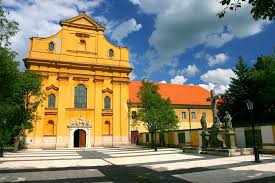 The City Center church of Szolnok, also called as Great Church (officially Holy Trinity Roman Catholic Church) can be found under no. 8 of Templom street. Ignác Bezdiczky salt officer moved to the town in 1718, and on the today place he made constructed a sanctuary-like chapel for the Franciscan friars in a manner to be extendable later. The Southern part connecting to the sanctuary completed in 1718 was built between 1723 and 1729.  In 1736 the foundation of the nave was prepared. The baroque style church and friary being actually an expansion, was constructed between 1724 and 1757 according to the plans of Giovanni Battista Carlone architect from Eger. The church including eleven altars acquired its today form in the 19th century.

You can find us here